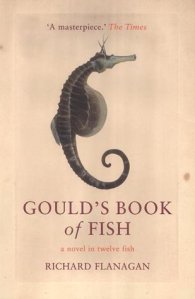 Tasmania. The present day. A petty forger finds an 1820s convict journal in a junkshop, then loses it (in a bar, he drinks a lot) and then, because it has captivated him so much – too much, perhaps – he decides to rewrite it from memory. So what we have is an original manuscript – which may never have existed anyway and has already been judged a fake – being remembered by someone who is possibly mad and definitely unreliable. It’s a nice set-up, with something of the tone – if not the fevered intricacy – of Mark Z. Danielewski’s House of Leaves. There is (in the overarching story) a ‘real’ Book Of Fish by William Buelow Gould, which contains only paintings, with no journal. In fact, it’s not just in the story – that Book Of Fish actually exists and was indeed by a real William Buelow Gould, a real convict artist, who was incarcerated on the very real Sarah Island, which was – Robert Hughes’ exhaustive history of transportation to Australia The Fatal Shore tells us – overseen by tyrannical commandant John Cuthbertson. Here reality and the novel part company: the remembered Book Of Fish tells of a commandant who wears a gold mask, has a Great Mah Jong Hall built and rides on a full-size steam train that goes round and round in a small circle, with painted backdrops outside giving the impression of a journey through the world’s great landscapes. The ‘real’ Gould – well, he’s not real in the book of course, this gets confusing but bear with it – is, like the supposed author, who is of course actually the Gould we are reading as well because he’s writing the journal as he remembers it – unreliable and possibly mad. Events in their lives intermingle and elide – no great surprise since they are in effect one and the same person – as a frieze of grotesques clamour for our attention and an impossible library reveals a dreadful secret. In short, it is all a clever tightrope act, the sort of halleucinogenic nonsense which can quickly outstay its welcome and have the reader retreating quietly to the exit long before the end. But this grips.

One thought on “Gould’s Book Of Fish by Richard Flanagan”

I would live all my life in nonchalance and insouciance / Were it not for making a living, which is rather a nouciance (Ogden Nash)