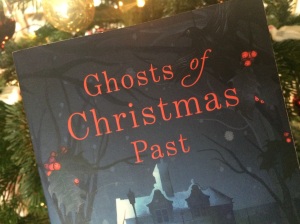 Oh, pour a glass of amontillado and put another bar on; it’s time for some winter chillers. All the short stories in this diverse collection, edited by Tim Martin*, ‘confine their haunting, chasing, shambling or manifesting to the festive season’. There is no stinting on the big names of the supernatural in Ghosts of Christmas Past – M.R. James, Neil Gaiman and Robert Aickman are here, for example – but there are also apparitions from less likely names such as E.Nesbit, Jerome K. Jerome and L.P. Hartley.

Hartley should have stayed at home: his Someone in the Lift starts promisingly but ends in confusing nonsense and Santa’s head struck by lightning, or something. It is ‘insufferable gibberish’ – which, in another context, is what that scourge of the wishy-washy, Roger Scruton, said about E.F. Benson’s writing. Scruton had obviously not read Benson’s The Step, which has a lively Hammer House of Horror vibe to it. Martin says it may be the ‘least subtle’ of the stories here, but it’s none the worse for that.

You really don’t want to see the shadow in The Shadow, by Nesbit, author of The Railway Children – but I suppose it reminds you that even her children’s books have bite to them.

The best stories are, predictably, by Aickman (The Visiting Star) and James (The Story of a Disappearance and an Appearance); the latter is truly nasty, as James often is, happily channelling the ancient violence of the Punch & Judy show.

How Aickman creates his effects is a matter of wonder: he takes small, insignificant set-ups (provincial theatre in this case), then throws in some unsettling detail (e.g. a smiling old man called Mr Superbus with ‘yellow expressionless eyes’) and unlikely happenings (a quiet revelation in a disused mine). It shouldn’t work but it nearly always does.

Anyway, a fine reward for all that shopping. Just don’t look behind you. That sound is probably nothing to worry about.

*I don’t think it’s the same Tim Martin who owns every Brexiteer’s favourite pub chain, but this is a season of surprises and we live in strange times

I would live all my life in nonchalance and insouciance / Were it not for making a living, which is rather a nouciance (Ogden Nash)